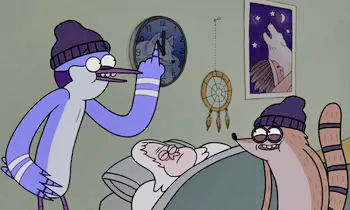 "This is the clock song! We're setting all the clocks wrong!"
Though the clock says 7:30, it's really after ten
Looks like Lulu's been "repairing" it again.
— Little Lulu theme song
Advertisement:

Clock tampering is the art of changing the time on a clock so that you could make time be in your favor and trick others into believing it to be the true time. Some kid may do this in school, when the teacher isn't looking, so he and his classmates can get out of school early, while an adult may make a clock go backward to forge his timecard and avoid getting in trouble with the boss for being late.

This trope is also used in mystery and thriller works, in which the murderer may alter the time on a clock to establish a false alibi about being somewhere else at the time of the murder.