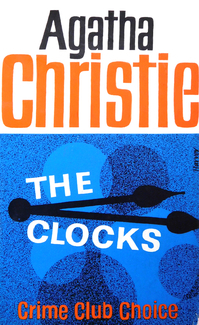 The Clocks is detective fiction by Agatha Christie first published in 1963, and is a part of the Hercule Poirot series, even though the Belgian himself only plays a small role in the story.

The novel is set some time during the Cold War, and features a spy fiction sub-plot, narrated in first person by Colin Lamb, a British Intelligence agent trying to track down a spy who has been passing information to the enemy. Colin's investigation brought him to the scene of a rather peculiar murder case, in which an unknown man was found stabbed in the house of Miss Pebmarsh, a blind woman. The man carries no identification with him, and no one seem to recognise him. His body was discovered by Sheila Webb, a typist who was apparently hired by Miss Pebmarsh, although the latter denies making such appointment. Colin then brings the case to Poirot, who agrees to investigate the murder through Colin's accounts.