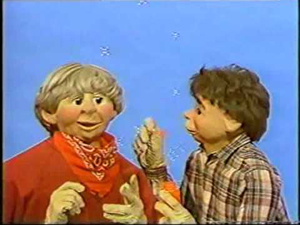 Peppermint Park was an educational home video series produced in The '80s by Televidics Productions and Mark V Productions. It features a cast of puppet characters who get together to teach children various different educational lessons, ranging from letters, numbers, colors, animals, and other similar topics through a series of lectures and songs.

The characters featured on this show have almost-eerily-realistic-looking heads, and almost all characters having gardening gloves for hands. Some of these characters include Ernie, who sings a song about the letter 'M'; Little Bit, a little girl with braided hair and a very muscular body who gives lectures about numbers; Piggle, an anthropomorphic ballcap-wearing pig who often screws up the lectures and demonstrations being made, sometimes by eating the objects being demonstrated; and Maynard, and elderly man who is so depressed about being blue that all he eats is bleu cheese.

The series itself is really obscure, having only been released on VHS and apparently limited to just six half-hour episodes. You'd be hard-pressed to find any actual copies of the tapes, but clips and full episodes from the series have been preserved for viewing on YouTube.

How could you order Tropes without the letter T?