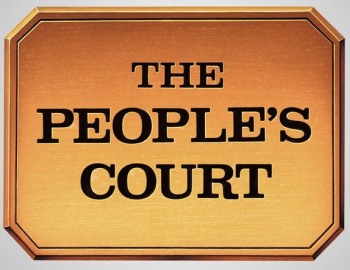 The Ur-Example of the judge talk show, The People's Court had its pilot episode taped in October 1980 and premiered on September 14, 1981 when Judge Joseph Wapner took the court to the TV. The premise is that two parties, a plaintiff and a defendant, that would otherwise take their cases to small claims court would instead agree to have their case settled on television by Judge Wapner. After the verdict was given, each side would be interviewed by host and court reporter Doug Llewelyn, who would often end the show with the Catchphrase "If you and another party find yourselves at loggerheads, and you can't work things out, don't take the law into your own hands: you take 'em to court." On the other hand, if a case ended with a verdict for the defendant, Llewelyn would instead end the episode by saying "If someone files a lawsuit against you and yet you're convinced you're not guilty, that you've done nothing wrong, don't be intimidated. The best policy, as always, is to stand up for your rights: go to court." The show's other two regulars were bailiff Rusty Burrell and announcer Jack Harrell. The show was created by John Masterson, who previously created and executive produced Queen for a Day. It was executive produced by Ralph Edwards, who previously created, executive produced, and hosted Truth or Consequences, and his production partner, Stu Billett. Both men packaged the show under their own separate eponymous production companies, Ralph Edwards Productions and Stu Billett Productions, until 1987, when the companies merged. The show was originally distributed by Telepictures until 1986, when that company merged with Lorimar, creating Lorimar-Telepictures. Lorimar-Telepictures continued to distribute until 1989, when it was purchased by Warner Bros., who continued to distribute until the show's cancellation in 1993.

After Judge Judy started the judge show revival in 1996, one of the first shows on the block was a revival of The People's Court, which premiered in 1997. Once again, the show was produced by Ralph Edwards-Stu Billett Productions and distributed by Warner Bros.. Former New York City mayor Ed Koch initially took the bench for the first two years, then was replaced by Jerry Sheindlin (husband of Judge Judy). He was replaced by Marilyn Milian in 2001, who presides over the court today. The bailiff during the Koch-Sheindlin years was Josephine Ann Longobardi. After Milian took the bench, she was replaced by Davy Jones, who only lasted relatively briefly and was in turn replaced by Douglas MacIntosh. Curt Chaplin took over the interview duties and became the new announcer, while host Harvey Levin, who worked on the Wapner version as the show's legal consultant, explains the legalese behind the judges' decisions while polling fans gathered outdoors. In 2016, as part of the show's 35th Anniversary, Doug Llewelyn returned as interviewer. Curt Chaplin, however, is still remaining with the program as the show's announcer.

Due to the COVID-19 Pandemic, Season 24 has a few differences. Milian and the litigants communicate through Zoom, with only Douglas in the courtroom, with Llewelyn stationed next to the logo sign in the hallway. Levin continues to provide commentary from his office at TMZ headquarters in Los Angeles, although his banter with viewers in Times Square has been replaced by having viewers send in legal questions for him to answer, and a new segment called “After the Verdict” was added, showing Milian and her husband, John Schlesinger (a real judge in his own right) discussing the verdict of the case. The intro was changed as well, with Chaplin narrating an altered version of the disclaimer, represented by scrolling text as in the Wapner and Koch eras, though they reverted to the standard intro a few weeks into the season; it was altered later on to use footage from Zoom cases.

The original is best known nowadays for being the favorite program of Raymond Babbit.

"Don't take the law into your own hands; take 'em to court - The People's Court."