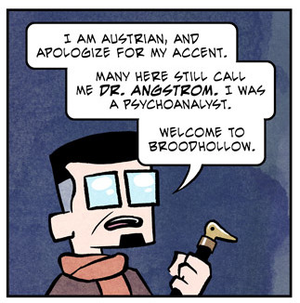 In TV Land, a doctor or scientist is roughly 75% likely to be German or Austrian, complete with thick accent and often an entitled legacy. Increase to 98% for Mad Scientists.

. Many top-notch Jewish scientists from Germany, Austria, and Poland fled Nazi persecution in the pre-war and early-war period. Many more War Criminals attempted to flee to western Germany in the final months of the war to avoid capture and trial (for the various amoral deeds they had done For Science! and for personal gain). This allowed the USA to threaten them with acceptance of eastern European extradition requests (for trial) and offer them free passage to and employment in US government projects (Operation Paperclip). These German-Jewish refugees and ex-Nazis were prominent in many scientific fields during this period, especially The Manhattan Project and US Space Programme. Several wartime theories and inventions designed to aid the war effort, for good or ill, eventually changed how people lived when they were mass-manufactured and sold to the public. This cemented the longstanding trope of foreign geniuses being boons to welcoming societies.

It's worth noting that Central Europe was a scientific and economic powerhouse in the early 20th century, dominating the physics field. More than a few German scientists were "rehabilitated" by the US strategic rocket and space programs (and a handful by the Soviets), to the point of each side complaining "they have more Germans than we do!"note  More specifically the US got nearly all the scientists who designed the rockets but fewer of the workers and technicians who actually manufactured and used them, and the Soviets got some of the manufacturers and very few of the researchers For a slightly safer stereotype, consider using a Swede or Norwegian instead, with the same unintelligible theories and outrrageous akksent!

In Russian classical literature set in the 18th and 19th centuries, there's a related trope of the other kind of doctor to be German as indeed was often the case during that period.

See also All Psychology Is Freudian, which has caused every psychologist to be portrayed as Austrian, and Stupid Jetpack Hitler for when this crosses over with Those Wacky Nazis. If the Nazi scientist has Supernatural Aid, see Ghostapo.