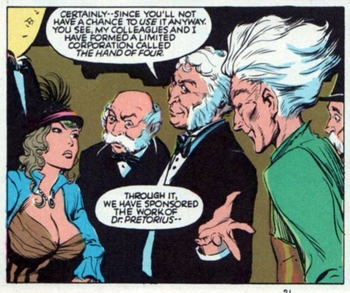 He must be legit. His name ends in 'ius'.
Advertisement:

By some weird reason, wizards and Mad Scientist types often have names ending on "ius" (possibly just "us", but "ius" is just better). It makes their names sound more smartass and at the same time badass.

Truth in Television with Vesalius and all of the other Medieval/Renaissance scientists who used Romanized names (Keys would become Caius, to cite a real-life example), the likely inspiration for the trope. It's frequently Canis Latinicus, though.

See also Dr. Fakenstein and The Great Whodini for alternate naming patterns used by scientists and magic-users respectively, and Herr Doktor for the German-sounding scientists.