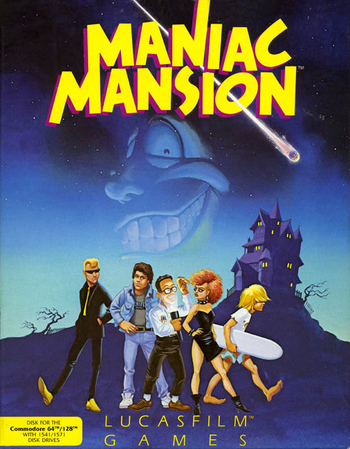 Oh, good! More brain donors.
"Well, my dear. Hope you're having fun! Within minutes, it'll all be over. You'll be hooked up to my machine getting your pretty brains sucked out."
— Dr. Fred
Advertisement:

Made in 1987, Maniac Mansion was LucasArts' first in a long line of Point-and-Click adventure games (when they were still named "LucasFilm Games" and way before they gave up on this genre and started making Star Wars tie-ins instead). The game is about Dave Miller, a 1980s college kid, and his group of friends. Each friend has a special skill, including Nerdy machine-minded Bernard, musicians Syd and Razor, photographer Michael, author Wendy, and Surfer Dude Jeff. The kids break into local Mad Scientist Doctor Fred's house to rescue Dave's girlfriend, The Cheerleader Sandy, from having her "pretty brains" sucked out in an experiment. Come to find out, they're not only saving her, but perhaps the entire world. Ron Gilbert and Tim Schafer were involved with its production.

It has unique non-linearity for a 1980s Adventure Game, complete with Multiple Endings of varying happiness depending on what characters you choose. Not only that, it's one of the first point-and-click adventure games, with an entirely mouse-oriented interface. Its game engine (Script Creation Utility for Maniac Mansion, better known as SCUMM) would be updated and re-used for many future LucasArts adventure games, up until its final iteration in The Curse of Monkey Island.

It later spawned a Canadian TV series that aired on YTV and The Family Channel based (very) loosely on the game, made by Eugene Levy and various SCTV alumni. Dr. Fred's family is portrayed as a (somewhat) regular American family, and most of the episodes revolve around Fred's experiments and inventions involving the meteor. Only Fred is carried over from the games, with the rest of the family being original characters made specifically for the show.

Spawned a Time Travel-based sequel: Day of the Tentacle. Two Fan Remakes were also made: The first is Maniac Mansion Deluxe

, a Windows-compatible version with updated graphics and fixed bugs, finished in 2004. The second is the unfinished Night of the Meteor

with more puzzles, more dialogue, more animation, and updated Day of the Tentacle style graphics, and has been in production for years. There has also been a series of episodic Fan Sequels named Maniac Mansion Mania. In 2017, the game had a Spiritual Sequel of sorts with Thimbleweed Park, which exists in the same universe and even has several of the characters within the game.

THE GAME IS OVER. Press f4 to play again.