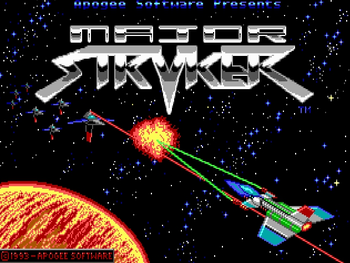 Major Stryker is a 2D Vertical Scrolling Shooter game for DOS PCs, released in 1993 by Apogee Software (now 3D Realms). Originally the first episode of the game distributed as shareware, and the rest were issued commercially. The game was re-released as freeware on March 14, 2006, and can be found here

Like most such games the story is basically an Excuse Plot: in the wake of World War III, Earth is invaded by aliens called the Kretons. The initial Earth counteroffensive is a disaster, and the majority of Earth's soldiers are captured. Earth's last hope is the hero of WWIII, Major Stryker, who is sent through the wormhole the Kretons came through to strike back.

Each planet consists of four zones, each consisting of two levels with a theme plus a boss. All the bosses in the game have different designs and the three end-of-episode bosses are all multi-stage.

The game features PC Speaker and Sound Blaster sounds, and Ad Lib music similar in style to Bobby Prince's other songs; it was the first game published by Apogee to include the famous Apogee Fanfare. The game uses EGA graphics and draws three backgrounds ("triple-parallax scrolling").