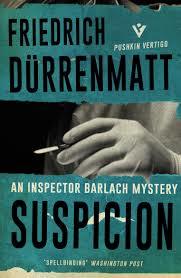 "We can't fight evil alone anymore, like knights setting forth against some dragon. Those times are over. It takes more than a little ingenuity to catch the criminals we're dealing with. You fool of a detective; time itself led you at absurdum."
—Gulliver lecturing Bärlach
Advertisement:

Suspicion (German: Der Verdacht), also known as The Quarry, is a crime novel by Swiss author Friedrich Dürrenmatt. It is the sequel to "The Judge and His Hangman" (Der Richter und Sein Henker). It got published from September 1951 to February 1952 as a serial story in a Swiss newspaper.

What makes it different from other crime novels is that it is not about finding the culprit, but about bringing him to justice and whether or not the protagonist survives.

The story is set in Bern, Switzerland, in December 1948/ January 1949. Inspector Hans Bärlach is recovering from an operation in a hospital. While reading an article in a magazine about the horrors of concentration camp Stutthof near Gdansk, he witnesses how his friend and doctor Samuel Hungertobel turns pale.

That article features a picture of the German Dr. Nehle who carried out horrific experiments and vivisections on the prisoners. Turns out that Nehle looks a lot like an old acquaintance of Hungertobel - which is impossible, because Dr. Fritz Emmenberger had been in Chile during the war.

Hungertobel waves the whole situation off as a coincidence, saying that Nehle and Emmenberger simply do look a lot alike, but Bärlach is determined to get to the bottom of it.

Bärlach takes a false name and moves from Hungertobel's clinic to Emmenberger. He is confident to scare Emmenberger enough to make him confess.

But soon, Bärlach finds Emmenberger and his complete staff aware of his true identity and ready to kill him. Bärlach, having severely underestimated Emmenberger, loses complete control off the situation.

No relation to the Alfred Hitchcock movie.