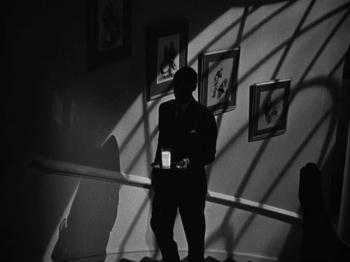 Suspicion is a 1941 thriller starring Cary Grant and Joan Fontaine, directed by Alfred Hitchcock. Fontaine plays Lina, an upper class Englishwoman who seems bound for a life of spinsterhood, until she meets rakish playboy Johnnie Aysgarth (Grant). They marry after a whirlwind courtship, but Lina soon finds out that Johnny is broke, a habitual gambler, an embezzler — and may be a murderer.

Suspicion was a critical and commercial success. It received three Academy Award nominations, losing Best Picture to How Green Was My Valley but winning Best Actress for Joan Fontaine—the only Oscar ever given for an acting performance in an Alfred Hitchcock film. Among the actresses Fontaine defeated for her Oscar was her sister, Olivia de Havilland, who had received a nomination for Hold Back the Dawn. (De Havilland would later go on to win Best Actress twice.)

No connection to the German novel of the same name.

Remade in 1988 as a UK/US Made-for-TV Movie (for ITV and PBS), with Lina played by Jane Curtin (of all people) and Anthony Andrews as Johnny.