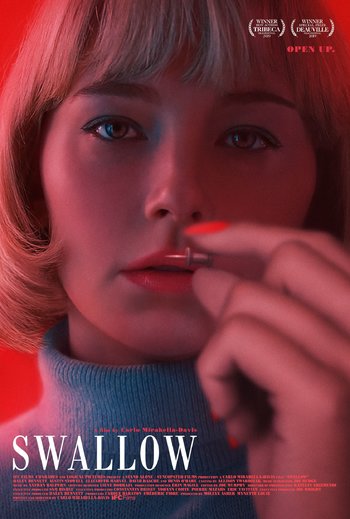 Swallow is a 2019 psychological drama-thriller film starring Haley Bennett and Austin Stowell. It was the directorial debut of Carlo Mirabella-Davis, who also wrote the film.

Bennett plays Hunter, a young housewife from a working-class family who lives an idyllic, picturesque domestic existence with her lovely upper-class husband Richard (Stowell) — or at least it seems that way looking in.

In reality, Hunter is deeply unhappy; her marriage is loveless, and people hardly listen to her or even see her outside the role of the subservient housewife she has fulfilled.

As a defence mechanism-cum-escape, she develops an impulse to consume inedible objects. As the compulsion grows more intense — and the physical and relational ramifications more severe — Hunter must confront the truth behind her obsession.

The film premiered at the 2019 Tribeca Film Festival before receiving wider releases in France and the USA throughout early 2020.