Western Animation / The Swallows of Kabul 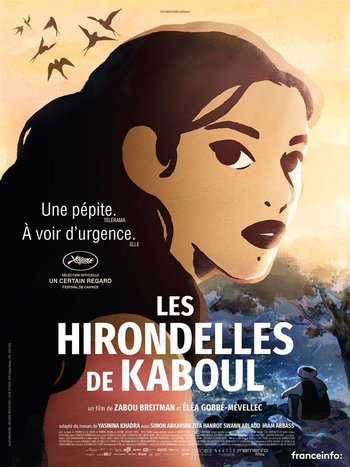 The Swallows of Kabul (French: Les Hirondelles de Kaboul) is a 2019 French animated film directed by Zabou Breitman and Eléa Gobé Mévellec. It is an adaption of the novel of the same name by Yasmina Khadra.

As the title suggests the story is set in Kabul, the capital city of Afghanistan, which is controlled by the Taliban. The main characters are two couples:

Early in the film, Atiq leads a woman from his jail to a lapidation place. Mohsen is present and throws a stone at her. He then feels guilty about that. Later he accidently dies while fighting with his angry wife, who is condemned to death and jailed under Atiq's guard.

Atiq, who already seemed to doubt, starts questioning the Taliban and their justice.

The Swallows of Kabul contains examples of the following tropes: