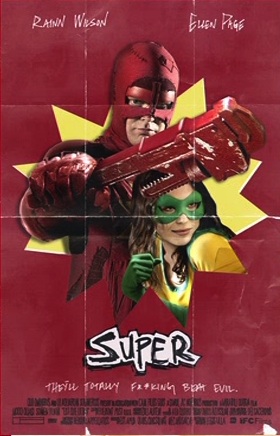 "Shut up, crime!"
"In between the panels. Is that where we are right now?"
— Libby/Boltie
Advertisement:

A 2010 Black Comedy written and directed by James Gunn, Super stars Rainn Wilson as Frank Darbo, a man whose wife, Sarah (Liv Tyler), falls under the spell of a charismatic drug dealer named Jacques (Kevin Bacon). To deal with the trauma and take down Jacques, Frank fights crime using the superhero identity the Crimson Bolt, armed with a garish patchwork suit and a wrench. He is aided by an unstable comic book store employee, Libby (Elliot Page), who becomes his sidekick, Boltie.

It originally screened at the 2010 Toronto Film Festival and was released in select theaters on April 1, 2011, with a VOD release the 8th of that same month.