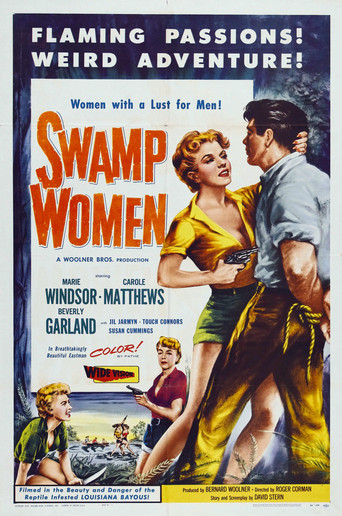 If you were this movie, you'd change your name too.

The film opens in the middle of Mardi Gras, with up-and-coming oil tycoon Bob Matthews promising to take his girlfriend Marie out into the Louisiana marshes to inspect some of his land holdings. Cut to the police station where plucky lady cop Lee Hampton learns she must undertake a dangerous mission to infiltrate an all-girl gang, currently in prison, and recover a cache of stolen diamonds. Unfortunately, the only way to recover the diamonds is to join the so-called Nardo Gang and break them out of jail so they can lead Lee to where the diamonds were hidden - deep in the Louisiana marshes. The gang stumbles across Bob and Marie exploring the bayou and promptly takes them hostage. Lee, already having trust issues with the gang, now finds her cover story increasingly harder to maintain as she tries to protect the hostages from the vengeful ladies. It's highly questionable whether any of them will make it out of the swamp alive.