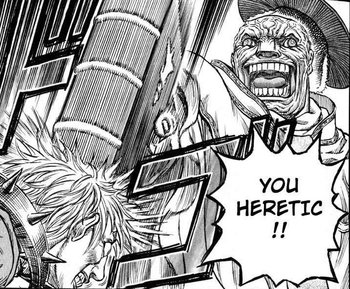 Bishop Mozgus, gently informing some hapless soul of the "error" of his ways.
"A fanatic is one who can't change his mind and won't change the subject."
— Winston Churchill
Advertisement:

We all know the type. Their beliefs are right, and anyone who does not believe as they do is stupid, crazy, evil or all three. The Fundamentalist is right, you are wrong, and being right is the only thing that matters.

A common behavior of The Fundamentalist is a tendency to dehumanize or demonize those not in line with their particular brand of belief, which allows them to lie to, abuse and otherwise mistreat those opposed to their beliefs, often in contravention of their own professed beliefs.

The most common Fundamentalists you'll meet in the West are Christian, but there are also breeds of Jewish, Muslim, Shinto and Hindu fundamentalism. Even Buddhism has had its "holy wars," exchanging campaigns of political repression, burning of scriptures, and outright murder with Taoists in ancient China.

Fundamentalism is also something other than a religious phenomenon. Non-religious ideologies like communism, capitalism, socialism, racism, environmentalism, fascism, democracy, anarchism and yes, even atheism, can all attract their own brands of "fundies" as well.

Fundamentalists crop up in Fandom. If, for example, you see Gollum as anything less than a direct agent of the Valar sent to destroy the Ring once and for all, the Tolkien fundamentalist sees you as bad and wrong. The Fundamentalist is pathologically obsessed with being "right," even in subjects that might not have a right answer — art criticism, hermeneutics, straight down to the best flavor of ice cream. Fundamentalism looks a lot like Fan Dumb, as this College Humor video

A religious fundamentalist may also be a Sinister Minister. See also: Knight Templar, Well-Intentioned Extremist, Holier Than Thou, Moral Myopia, Single-Issue Wonk, Dry Crusader, Strawman Political, Windmill Political, Windmill Crusader, With Us or Against Us, Lawful Stupid and Poe's Law. Atheism is given this attribution in various instances when extreme skepticism is employed against the supernatural or religious beliefs, but most instances in fiction can fall under the tropes Flat-Earth Atheist, Agent Scully, and Hollywood Atheist. Also compare Totalitarian Utilitarian and Principles Zealot for similar attitudes to secular philosophies. Contrast The Soulsaver and Soul-Saving Crusader for religious fundamentalists who are objectively right within The 'Verse of the setting.

Momoko is a twelve year old far-right, born again Evangelical Christian whose soft-spoken, polite demeanor heavily contrasts her prejudiced teachings and hatred to those not aligned with her faiths.

Momoko is a twelve year old far-right, born again Evangelical Christian whose soft-spoken, polite demeanor heavily contrasts her prejudiced teachings and hatred to those not aligned with her faiths.