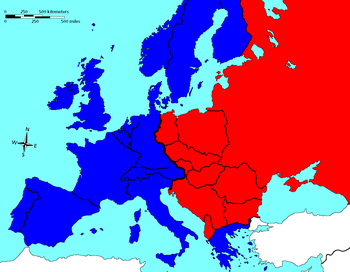 Europe as divided by the Iron Curtain, 1946-48. Western-aligned states in blue; Soviet-aligned states in red.note In 1948, Yugoslavia broke away from the Soviets in later became a founding member of the Non-Aligned Movement; in 1955, Austria was reunified as a neutral state; in 1960, Albania broke away from the Soviets and realigned with Mao's China. All other alignments remained consistent until the Revolutions of 1989.
Advertisement:
"From Stettin in the Baltic to Trieste in the Adriatic an 'iron curtain' has descended across the Continent. Behind that line lie all the capitals of the ancient states of Central and Eastern Europe. Warsaw, Berlin, Prague, Vienna, Budapest, Belgrade, Bucharest and Sofia; all these famous cities and the populations around them lie in what I must call the Soviet sphere, and all are subject, in one form or another, not only to Soviet influence but to a very high and in some cases increasing measure of control from Moscow."
— Winston Churchill, 5 March 1946

The Iron Curtain was the physical dividing line between Western Europe (mostly under NATO's protection) and the Warsaw Pact section of Commie Land during the Cold War, designed to stop people from the East going to the West, and (to a lesser extent) people from the West going to the East without authorization. It was justified with the argument that a barrier was needed to stop the infiltration of spies from the other side.

Like the Warsaw Pact itself, it was not a monolithic entity. The level of defences varied between countries, being thickest between the two Germanies and on the border of Czechoslovakia and thinner elsewhere. One particularly nasty item was the East German SM-70

, a trip-wire activated mine mounted to the border fences between 1971 and 1984 when they were removed in a deal with West Germany (who gave East Germany a much-needed $496m loan in return); someone attempting to climb or cut the fence and tripping the device would get explosive-propelled shrapnel fired at them, lethal out to 25 metres. The most frequent victims were in fact deer. The Czechoslovaks went for a 5,000 volt electric fence instead.

Between Austria and Hungary, it was just a fence and was easily dismantled. Or, to reuse a metaphor, the Iron Curtain turned out to be Rusted Drapes!

The border guards did not have it all their own way; it was not unheard of for escapees to fire back and there were cases of guards being killed by their comrades who were defecting.

When Churchill spoke, Austria (and its capital Vienna) was similarly divided, though unlike Berlin, the centre of Vienna was an international zone, patrolled by "four in a jeep" - one British, one American, one Soviet and one French soldier. However, in 1955 the four powers agreed to withdraw from Austria and reunify the country. In exchange, Austria promised to remain neutral, which it did. Vienna became likewise a popular setting for spy dramas thanks to its "no man's land" status.

Yugoslavia, while socialist, left the Soviet bloc fairly soon after Churchill's speech and the Iron Curtain never went between Italy and what is now Slovenia. Albania was far more closed off though - in fact Albania also left the Soviet bloc, thinking the USSR too soft and following Mao's China, and later isolated themself even further.

The Present Day legal status of these boundaries vary widely. Outside Germany, most of these are now peaceful (but sometimes still heavily-armed) international boundaries, although in most cases the countries on both sides are EU member states whose citizens have the right to free movement between them. The longest stretch of the old Iron Curtain that is still a closed border to this day is the border between Armenia and Turkey, due to animosities that predate the Cold War by a long shot. Within Germany, most of it forms a number of state lines; within Berlin, due to a late 1990s readjustment of borough boundaries, some parts of it have no legal status as boundaries whatsoever. In addition, much of the old Iron Curtain is now nature reserves; it was left largely untouched for 40 years and the wildlife moved in - although deer will still not cross over the old border.

More recently, however, Hungary has erected a fence between itself and Serbia to stop the flow of migrants, essentially recreating the Iron Curtain there but in a different form. Ditto with Poland and Lithuania in 2021 in the face of the migrant crisis that's been organized/weaponized by Belarusian president Alexander Lukashenko.

It bears mentioning that Churchill did not coin the phrase "Iron Curtain" to describe the Soviet takeover of Eastern Europe. It was also not, despite what you may have heard, coined by Joseph Goebbels in the closing days of World War II. In 1920, British socialist Ethel Snowden first used the term in her book Through Bolshevik Russia, where it described the border between Soviet Russia and the rest of Europe; for most of Stalin's rule entry into the USSR was effectively impossible for a Westerner.