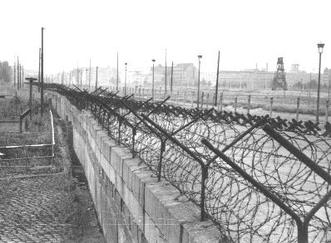 "There are many people in the world who really don't understand, or say they don't, what is the great issue between the free world and the Communist world. Let them come to Berlin."
— John F. Kennedy, "Ich bin ein Berliner" speech, 06/26/1963
Advertisement:

Within the Communist nation of East Germany was the isolated Western exclave of West Berlin, the Allied-occupied remnants of the former capital of Nazi Germany. West Berlin was not a part of West Germany — its residents couldn't serve in the West German military or vote in federal elections. But it was still connected to West Germany, and it was a little node of freedom within the Eastern Block of the Iron Curtain. If you could get to West Berlin, you could get to anywhere in the West. And for a time, many East Germans did exactly that, or died trying.

Facts about the Wall

The Fall of the Wall

The Berlin Wall was finally brought down on 9 November 1989, when Günter Schabowski, an East German minister announcing new regulations regarding exit visas for East Germans that were to take effect the following day, got confused and said they were effective immediately. Thousands of people turned up at the border crossings and overwhelmed the guards — who, unwilling to use lethal force on so many unarmed demonstrators, let them through. The Westerners on the other end decided to throw a big party, where they knocked down the wall with sledgehammers, drank lots of beer, and even loved them some David Hasselhoff.

Bits of the wall ended up all over the world, including at Ronald Reagan's Presidential Library in Simi Valley, California, Gerald Ford's Presidential Library (we're asking the same question) in Grand Rapids, Michigan, the gardens of UN Headquarters in New York City, the Newseum in Washington, D.C., next to the Baker Institute at Rice University, and in Seoul, the capital of another country divided in two by a "wall" of sorts, even to this day. There is also a bit of wall in Schengen, Luxembourg, where the treaty establishing open border in most of Europe was signed. And there are still little bits of it in Berlin, most famously the East Side Gallery, as well as a few panels in the Potsdamer Platz.

But the wall hasn't collapsed entirely — ever since, Germany has dealt with what it calls die Mauer im Kopf, or "the Wall in people's heads". The disparity in attitudes, living conditions, and politics between East and West could not be papered over by the fall of the wall, and many people in East Germany, not too happy with how the West had been treating them, wandered into the arms of the extremist Left Party (the direct descendant of the Socialist Unity Party that ruled East Germany) and the right-wing extremist Alternativ für Deutschland party. But this only seems to affect people who remember the wall. People born after about 1985, who are too young to remember the wall (i.e. most German Tropers), tend to regard all of this as a non-issue, and see the main cultural divide in Germany as between North and South rather than East and West. The wall only stood for twenty-eight years, and more time than that has elapsed since the fall.

And the wall itself might not exist, the physical divisions it caused still do, especially the wider Inner German Border. Although much of the transit system has been reconnected, there are still some obvious "holes" in the network (which the German Unification Transport Projects

only partially addressed). The building style is totally different between East and West. The local wildlife still follows the pattern of the border even when no physical trace of it is left. And you can you can still see the impact of the wall from space

. Bottom line, for as lucky as we were that the wall didn't make it to three decades of existence, the damage it did is proof enough of the harm caused by heavily militarized borders.

The Wall in fiction: