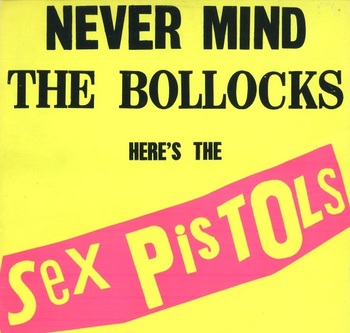 Never Mind the Bollocks, Here's the Sex Pistols is the debut studio album by The Sex Pistols, released in 1977. Discounting the soundtrack The Great Rock 'N' Roll Swindle as well as their live albums, it is also their only album.note Though a lot of compilations have followed, mostly with singles and/or live recordings which didn't appear on this album Infamous, controversial and very influential, it's seen as a landmark album between the psychedelic and art rock era of the late 1960's and the back to basics simple rock sound of the punk and new wave era of the late 1970's. Today it's widely regarded as one of the best, most influential and most important rock/punk albums in music history.

The record collects four of the group's hit singles: "Anarchy in the UK", "God Save the Queen", "Holidays in the Sun" and "Pretty Vacant" and adds a handful of other songs. Guitarist Steve Jones played bass for the vast majority of the album, and the infamously incompetent Sid Vicious "plays" bass on only one song ("Bodies"). Former bassist Glen Matlock appears on "Anarchy in the UK".

We're so tropey, oh so tropey!: