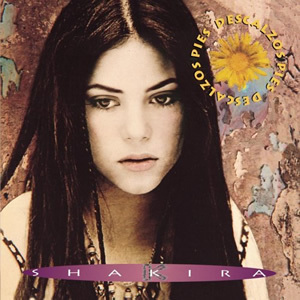 Pies Descalzos is the 1995 first official, though technically thirdnote The first two were massive commercial failures and good luck finding them, music album by Shakira. The English translation of the name is "Bare Feet".

The album was made on a budget of $100,000 because the producers expected it to not do so well. They were wrong. It very quickly became one of Colombia's best-selling albums and by the end of the year it was one of the most popular pop/rock albums in Latin America, and doing pretty well in the Latin music scene in North America, too. Several singles were released from the album, and they were all (that had been out by that point) featured on the 1995 Latin American version of "NOW That's What I Call Music!" ("Boom"). Given that Shakira herself was billed pretty high on those CD covers, she had almost overnight become a household name.

No, seriously. It was certified Diamond Prism in Colombia, Shakira's home country, but also hit #3 on the Billboard Latin charts and was certified platinum in the US. And twice platinum in Argentina. It was the 71st most popular album in Germany in 1996. By the end of 1996, Shakira was among the 10 top-selling Latin artists worldwide. The album was, somehow, a commercial success. Despite not having much money beside it, this could be chalked up to actually being really good.

The immediate success seen allowed a 1996-97 album tour to happen, where basically every country the album was released in was visited. Despite Shakira being a teenager at the time, pretty much all of the songs are about different kinds of romantic relationships (not "Pies Descalzos", though, funnily enough). Those six singles released were also all successes in the US, and many of them got music videos. They are "Estoy Aquí", which was seen as the stand-out of the album and was an even bigger success than the album, "¿Dónde Estás Corazón?", which had been included on the Nuestro Rock compilation album and successful enough that it was chosen as a second single for Shakira, "Pies Descalzos, Sueños Blancos", theoretically the title track but the third single and which didn't do as well as the first two (which hit #1 and #3 on US Latin Billboard, PDSB only reaching #11) possibly because of its more balladic style and cultural subject matter, "Un Poco de Amor", which also reached #11 and was critically applauded for its reggae style, "Antología", which is largely forgotten despite being #3, and "Se Quiere, Se Mata", which shot back to #1 and retained fame in Spanish countries.

Shakira's philanthropic foundation shares its name with this album (Fundación Pies Descalzos). In 2002, it was re-released as a Shakira Gold Album (shortly after, there was also a Shakira Greatest Hits Album that included songs from ¿Dónde están los ladrones? as well). Often, the song "Pies Descalzos, Sueños Blancos" will be referred to as simply "Pies Descalzos", both because the album is named for it and because it's really long.