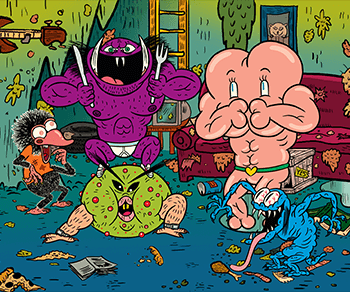 And this isn't even scratching the surface.
"Now was that funny or just disgusting? I don't know, I'm asking."
— Slap T. Pooch, Oh Yeah! Cartoons
Advertisement:

Animated show that relies heavily on ugly animation, displeasing concepts and extreme close-ups of things such as hairy, warty green tongues, stink-line-laden sewage sandwiches, and toilets that haven't been cleaned in a long time.

Pioneered by John Kricfalusi with The Ren & Stimpy Show, this type of show dominated children's animation in the early 1990s. The animation house Klasky-Csupo and the studio Spumco specialized in animation of this style. Many of these clones failed to realize, however, that the success of Ren and Stimpy was also due to excellent writing, not just the presence of icky, stinky things. However, most of these clones would eventually develop their own loyal followings thanks to their other unique concepts.

See also Animated Shock Comedy, for what happens when this kind of show grows up. (Or doesn't.)