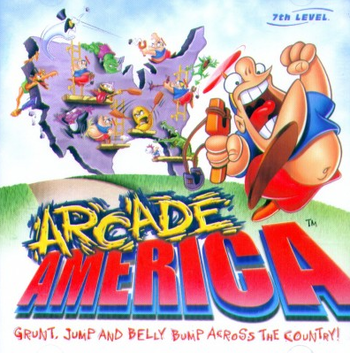 Arcade America is a Platform Game, developed by 7th Level and released on PC in 1996.
Advertisement:

You play as Joey, an obese man who happens to own a band named "Joey and the Monsters" (where the band-mates are literally monsters.) You received a call from Lance Boil to have your band preform in Woodstock in four days. One night, the monsters tried to wake you up by using dynamite, which causes all of them to scatter across the USA. Now you must drive from California to Woodstock while picking up your band mates before time's up.