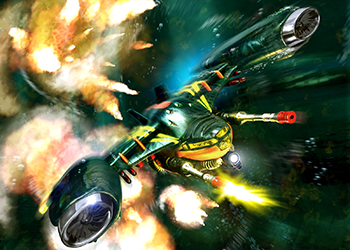 An underwater vehicular combat sim, created by now-defunct German developer Massive Development (not to be confused with Swedish studio Massive Entertainment). The game is a direct sequel to their earlier title Archimedean Dynasty (a.k.a. Silent Running, which takes place in the same fictional universe a few years prior.

In the future, due to World War III and an antimatter meteorite, civilisation will be forced to emigrate and live in underwater stations in the depth of the ocean.

The first game was released in 2001 and placed you in the role of Emerald "Deadeye" Flint, a mercenary fighting a race of cyborgs called the Bionts (picking up from where you left off in Archimedean Dynasty). 2003's sequel, Aquanox 2: The Revelation, gives you the role of William Drake, a young (and initially quite naive) man whose cargo freighter gets hijacked by a bunch of pirates, led by a treasure-obsessed man named Amitab, who then shanghais him into fighting for them.

The franchise stayed dormant for a decade, as Massive Development was shut down by their parent company, JoWood in 2005. JoWood themselves was later bought up by Nordic Games (now THQ Nordic), who at Gamescom 2013 announced that they are working on a reboot of the franchise. That reboot turned out to be Aquanox: Deep Descent, funded

on Kickstarter in September 2015 and released in October 2020.