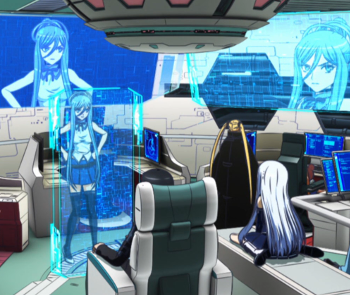 "I am the Normandy now. Its sensors are my eyes. Its armor, my skin. Its fusion plant, my heart."
— EDI, Mass Effect 2
Advertisement:

Throughout history, many countries have observed the tradition of always referring to ships and other seafaring vessels as "she." This even applies to ships named after men (e.g., the USS Ronald Reagan). These traditions continued with the development of aircraft, and the metaphor (in fiction at least) has also been extended to space travel.

So, what happens when the personification is taken a step farther? You get a walking, talking female avatar of a Sapient Ship—a Spaceship Girl.

She may be a holographic projection by the ship's computer, or she may be a physical manifestation created by Black Box technology, she may be a Wetware CPU running the ship, or she may simply turn into a human when she wants to; but she is the ship, and thus requires special handling. Spaceship girls range from the deadly serious to the outright wacky, but they are never just machines. Hint: don't make her angry when you're parsecs away from the nearest planet...Or even if you're close to a planet.

Compare with Robot Girl, Sapient Steed, and Living Figurehead. A subtrope of Sapient Ship and often a kind of Genius Loci. Related to I Call It "Vera" and Living Weapon. Psychologically related to Companion Cube. Might become a love interest. See also Living Ship.