Literature / Web Of The Romulans 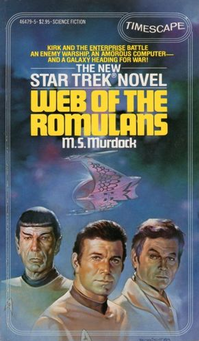 Web of the Romulans is a 1983 Star Trek Expanded Universe novel by Melissa Murdock. According to The Other Wiki, it was the first original Star Trek novel to make it onto US bestseller lists. It was also one of the first Star Trek novels to attempt to explore Romulan society in depth (although Diane Duane's later Rihannsu series is probably better known by fans).

While trying to cope with increasingly erratic behaviour by its main shipboard computer,note continuing a plot point that started in Star Trek S1 E19 "Tomorrow Is Yesterday", the Enterprise is sent to the Romulan Neutral Zone to try and investigate reports of strange things going on inside the Romulan Empire. They soon encounter a lone Romulan vessel, which refuses all attempts at communication, sitting just inside Federation space and... doing nothing. That vessel's commander, S'Talon, is struggling to follow top-secret orders while dealing with a rebellious crew and an overly-ambitious government agent.

Meanwhile, there are dangerous political intrigues underway on both sides of the Neutral Zone... and the slightest wrong move could trigger a catastrophic war.