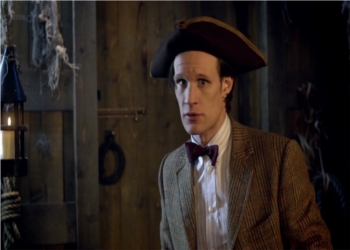 Another hat for the collection?
"Yo-ho-ho!... Or does nobody actually say that?"
— The Doctor
Advertisement:

The one where Rory dies on a pirate ship. And gets better. Yet again.

The TARDIS is marooned onboard a 17th-century pirate ship, whose crew is being attacked by a shiny green Lily Cole.

The night is clear, the sea is calm, and one very nervous pirate, after slipping in the bilge water and cutting his finger, has a very black spot on his hand. His state of mind is worsened after the captain himself says that he's a dead man. Then the singing starts. A certain someone is on her way.

McGrath's not going down without a fight. He grabs a pistol and charges out on deck to try and escape, and the others take the precaution of locking the door behind him. There's a scream and then silence, and when the others come out onto the deck, there's no trace of McGrath, just like all the others. This does nothing for the mental well-being of the remaining crew, but the captain holds hope that the wind will change and they'll be able to escape. Suddenly, there's a banging from below decks... It's the Doctor, Amy and Rory.

Captain Avery is understandably skeptical that the TARDIS crew picked up a distress call from them, since the pirates sent no signal and none of them has the faintest idea what a "sensor" is. Avery quickly gets fed up of all the Doctor's technobabble in trying to explain how the three got there in a blue box. Instead, he pulls a gun on them. He settles on the more simple solution — they're stowaways. What shall we do with them?

The Doctor is forced to walk the plank, with Rory getting a go next. Amy, as the "doxy", will be put to work below decks. Rory protests that Amy is not a doxy, which doesn't help. Once the pirates are done Locking MacGyver in the Store Cupboard, Amy immediately jumps back out again with a nice sword and a "brilliant" pirate captain outfit. Also, the Doctor has noticed that five pirates is a very small crew for such a large ship.

The pirates are rather reluctant to take Amy on. She manages to nick the hand of one of them and the wounded pirate realises that he's dead now. One cut is all that it takes, as the black spot appears on Amy's victim. Then Rory fumbles a sword catch and now he's got a mark too. They are next on the menu for the siren that lurks in these waters. Poor guy just can't win.

A melodic voice pipes up again, which really doesn't help the situation. Avery says to stop up their ears to block out the Siren's hypnotic song. Before Rory can finish being dismissive of that last statement, he falls under her spell. Then... starts acting like he's high. According to Avery, this is normal for the Siren's victims.

Green and glowing and beautiful, the Siren makes quick work of the enthralled pirate, who vanishes in a cloud of... something. Now it's Rory's turn, and he seems to be quite looking forward to it. Amy is not, and makes it clear that Rory is taken already. The Siren responds by turning red and showing lots of teeth.

Once they're all "safely" in the hold, Amy proceeds to ask just what the hell that was. It's a Siren and she's been preying on these waters for years, and she's been picking off the wounded crew one by one, attracted to blood. She's like a shark... a green singing shark in an evening gown. Once again the Doctor babbles, once again Avery pulls out the gun. One of the pirates gets bitten by a leech in the water, which causes a mass shuffle to dry ground.

The Siren gets into the hold anyway, and takes the leech victim. At least the Doctor gains a nice hat. Once they're safer, the Doctor surmises that she's using water like a portal. Where on a ship in the middle of the ocean can you find somewhere with no water? The powder magazine. The Doctor tells Avery not to be threatened by the fact that he's got a hat now.

When they get there, the key to the door is missing from its ring, and the door is already unlocked. Somebody else had the same idea, and that somebody is currently hiding in a barrel.

"Gotcha — what are you doing here, boy?"

The boy is in fact Avery's son, Toby, whose mother has died. He's under the impression that Avery is a celebrated naval officer, and he stowed away on the ship so he can join his fabled dad's crew. Which Avery isn't too happy about, to say the least. The boy also has a nasty cough and... the black spot. He doesn't have any cuts, though. The theory about the Siren being attracted to blood is out the window; instead she focuses on the wounded and sick. Humans being as weak and fragile as they are, it's only a matter of time before they all damage themselves in some way and become her prey. All the more reason to get out of here. The Doctor and Avery have another little test of wills and the gun comes out again (Freud would say he's compensating). Toby, meanwhile, feels thirsty, and since there's a barrel of water, he lifts the lid to get a drink — and the Siren's arm comes out. The Doctor forces the lid back down on it.

Avery leaves Toby his good luck medallion, and Amy reminds the Doctor to be careful about getting scratched or something. The Doctor and Avery, now on a mutual footing, get to the TARDIS without any mishaps, though it's a near thing. Avery is quite delighted by the TARDIS and quickly figures out how some of the controls work, because hey, a ship's a ship, no matter the type.

Back in the barricaded cabin, the remaining pirates aren't too keen on babysitting Toby, and make to leave with the ship's row boat. Toby isn't happy about that, since they're disobeying their captain. The pirates rain on his parade and inform him exactly what Avery really does for a living; "We sail under a black flag, the Jolly Roger". Poor Toby. Still, he's not about to let them leave, and unwittingly condemns one of them when he slices his hand with a sword. His friend promptly takes the keys and makes off, and much as the afflicted man would like to shoot Toby, he really can't, since they're in a powder room and all. All they can do is re-barricade the door.

Back on the TARDIS there are some navigational problems, as the ship can't lock onto the plane they're currently in for some reason. The ocean's involved in some way. Then the TARDIS starts having a tantrum, everything's acting up, and she's about to dematerialise. "ABANDON SHIP!"

The TARDIS is gone.

On their way back to the others, they're waylaid by Mulligan, complete with guns. It's a mutiny. He's got the last of the supplies, but Avery's more concerned about his treasure. A chase ensues, ending with Mulligan locked in a little room, lighting a candle — and burning his fingers. The Siren's song starts, but she's not here for the two outside the room. The problem is, since there's no water in there, how did she get in?

The answer is, quite literally, in Avery's hands. Reflections are the gateway, not just water. Where does one find lots of reflections but in the polished metal of a treasure hoard... And in a shiny medallion Avery left around his son's neck.

For a change, they get there in time and the Doctor fogs up the medallion with some heavy breathing. Now they've got to get rid of all the reflections and that means dumping all this treasure in the sea. Avery isn't too happy about that, but for Toby's sake agrees. Now they play the waiting game, until the sea roughens up again.

Amy sees the Eyepatch Lady again. It's through a hatch in a wall, but there's no hatch in the wall.

The Doctor and Avery can go up on deck, and they do so and have a chat about things like travelling and companions and how Avery doesn't think he's a good father and can't go back to what he was before. Cheerful stuff. The Doctor is a healthy proponent of the belief that everything can change.

The night wears on, and the Doctor gets the distinct impression that someone's watching him. Then a thunderstorm starts. Time to man the sails, which is pretty hard considering how few of them there are. It turns out that Avery didn't throw out all of the treasure, since there is one crown left and thus a way for the Siren to get through. Get through she does, and takes Toby before the Doctor can chuck the thing overboard. Once he does, he's none too pleased with Avery. How much does that treasure mean to him, that he could let it destroy his life so? His rant gets cut off when Rory falls overboard. Guy just can't get a break.

He's drowning. If they go in after him, they'll drown too. Damned if you do, damned if you don't. The Doctor decides to Take a Third Option and releases the Siren, thinking that maybe they can reason with it, since it's clearly intelligent and not just a ravenous hunter. They prick their fingers. The black spots emerge, and so does the Siren.

They wake up on the bridge of an alien ship. Basically, the pirate ship and the alien ship exist on the same plane, but in two different dimensions, and all the reflective surfaces are where the barrier between the worlds is thin enough to slip through. Everyone who "died" is lying in the sickbay. The Siren is a medical hologram left on autopilot; the black spots are tissue samples. However, since he is dying anyway, letting Toby escape would only harm him.

Rory would also drown if removed from the machine. However, he gives Amy instructions on how to perform CPR, and agrees to let them drag him to the TARDIS and revive him again. Our heroes leave the alien ship in the hands of the pirates, where Toby, hooked up to the machine forever, can travel the stars with them.

Back on the TARDIS, Schrödinger's Pregnancy is still going on, and the Doctor is very worried. He keeps it a secret from the others while Amy and Rory continue to angst about the Doctor's impending death.