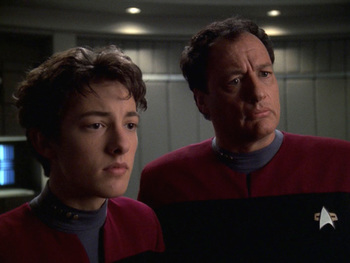 Spitting image.
Q brings his now teenage son that he had fathered in "The Q And The Grey" on board Voyager in the hopes that Captain Janeway would be a good role model to him, only with the later added provision that his Q powers are stripped away so that he could learn how to exemplify the qualities of a true Q before he could return to the Continuum.