Comic Book / Doctor Who: The Forgotten 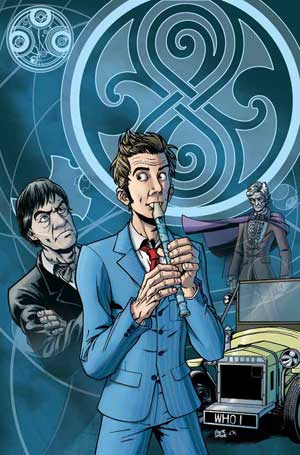 The Forgotten is a Doctor Who Expanded Universe six issue mini-series published by IDW, written by Tony Lee with art by Pia Guerra, Kelly Yates, Stefano Martino and Nick Roche. It was published to coincide with the franchise's 45th anniversary.

The Tenth Doctor and Martha have found themselves in a strange museum. It contains various items the Doctor is familiar with, including an exhibition dedicated to his past selves. Shortly after discovering the exhibition, something terrible happens: The Doctor loses his memories! Well, at least all memories from before he looked like David Tennant. Trapped, TARDIS missing and dying, the Doctor must regain his memories with the various canes, recorders, jelly babies and umbrellas in the museum. All the while, a bearded figure watches, waiting for the Doctor to die....