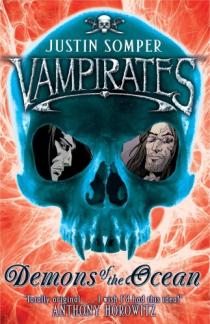 Series of children's horror novels by Justin Somper. Tells the story of Grace and Connor Tempest, whose father has just passed away. Two families in their hometown of Crescent Moon Bay want to adopt them, but for selfish reasons. They run (well, sail) away, but are separated during a storm at sea, and are picked up by two very different ships - Connor by normal pirates, Grace by the titular vampire pirates. The first book chronicles their separation and reuniting, while the others detail their adventures together among both mortal buccaneers and vampirates.

There are currently six books in the series, all of which are available in the United States:

There has yet to be a "rival" series with werewolf ninjas. ...Or is there?

It has no relation to a webcomic by the same name, other than containing vampire pirates.