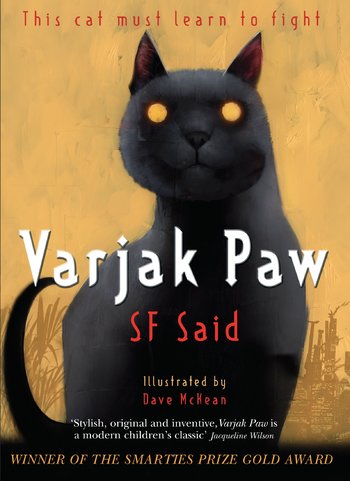 Varjak Paw is a noble Mesopotamian Blue kitten, who lives in an old house high on the hill with his family and their owner, the Contessa. Varjak loves to hear from his grandfather stories of the family's earliest ancestor, Jalal, and his Way. It's said Jalal traveled all the way from Mesopotamia, fighting mighty warrior cats, and that he was a great hunter who travelled to the ends of the earth before settling in the house. But Varjak is the only one interested in adventure; his family, except his grandfather, are all content to stay behind the high walls, where they are fed and looked after.
Advertisement:

Then the Gentleman arrives, accompanied by two strange cats who do not talk and have strange, blank, black eyes, and their arrival, along with the Contessa's death, throws the house into turmoil. Both Varjak and his grandfather sense something strange and wrong about the Gentleman, although the rest of the family refuse to see it. Spurred on by his grandfather, Varjak escapes from the house into the outside world in order to find and bring back help.

Now Varjak must attempt to survive in the city beyond the walls; he must befriend allies and survive, so he can return home. Dogs, cars, even other cats are all a threat to him, as are the mysterious Vanishings, when a cat will disappear and never be seen again...

The Outlaw Varjak Paw is the sequel; Varjak must find a home for a group of street cats. In doing so, he incurs the dangerous attention of Sally Bones, who rules both her gang and the cats of the city by fear. But Sally Bones is not all she seems, and somehow, she has learnt the Way...

Both books are written by S.F. Said, and illustrated by Dave McKean.