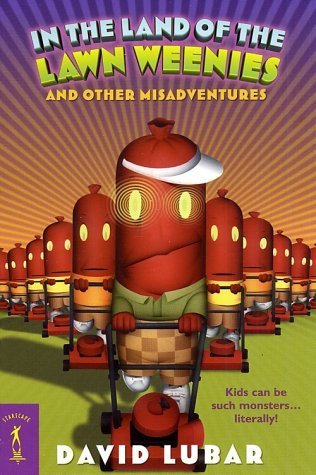 You wouldn't think that a book with this cover could be a source of Nightmare Fuel, would you?
Advertisement:

Weenies is a series of short children's horror anthologies written by David Lubar. And he sure doesn't mind flaunting the scary either. A lot of these shorts contain stories that wouldn't be out of place in an Junji Ito manga! However, it should also be noted that not every story is played for horror. Hell, some tales aren't even supernatural for that matter (One short is simply about a scary experience with a barber).

Quite a few are more lighthearted and embrace the weirdness of their premises (ex. One tale is simply about a kid talking with the personification of bad luck), trying to make you laugh, some even pull a "Scooby-Doo" Hoax....and of course there are those stories that are both scary and hilarious.

The series debuted in 2003 with In the Land of the Lawn Weenies, and is currently has a total of nine installments. In 2019, a spinoff was launched called "Teeny Weenies" which is the same format, but with illustrations and aimed at a younger audience.