Fairy in a Bottle 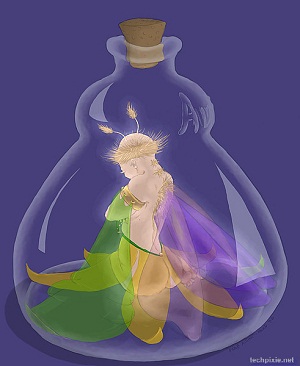 Yes, but how did they squeeze her through that tiny opening? It's way too narrow for her wings! (Image: Kathy Day

The Victorian image of a fairy is a tiny creature, perhaps the size of your palm, with dragonfly-like wings. Unsurprising that a creature that resembles an insect and is only slightly larger than one, then, would frequently find itself caught in a jar like an oversized firefly. It's also a visual pun on the Victorian "fairy light", a candle with a porcelain hood, since fireflies captured in a bottle can be used as a light source.

Fairies in a bottle have many different purposes. They can be used to heal you, grant you wishes and combine their abilities with yours to make you stronger or to grant you powers.

Although she might have been captured for legitimate reasons, far more often the fairy is innocent of wrongdoing, and will reward you for saving them. Although frequently no mention of the reasons or lack thereof will be made, as the fairy will be used more like an object or tool rather than a living being.

Because of this abuse from other species — generally humans — the tiny fairies may despise humans and distrust them. This view can be changed by a kindly human setting them free, although they may be ostracized from the fae community for their new beliefs.

Fairies in a bottle are much more likely to be female, have an Ambiguous Gender, or have No Biological Sex, than be male.

Despite fairies being sapient beings, there's almost no squick factor to this, unlike the one you get from putting human beings in a similar container.

In spite of the trope name, this can apply to fairies in mason jars, glass lanterns, and other small prisons, especially if they are often used for light or catching insects or small animals.

Subtrope to Our Fairies Are Different. See also Fairy Companion, Genie in a Bottle, and The Fair Folk.

Not to be confused with the anime Bottle Fairy.