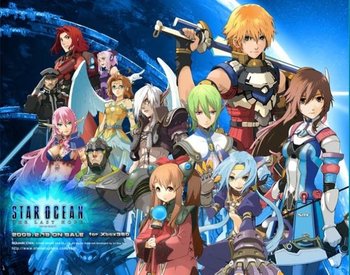 Star Ocean: The Last Hope is the fourth console installment in the Star Ocean series. It was released for the Xbox 360 in 2009 and got an updated re-release for the PlayStation 3 in 2010. It received another updated re-release on November 28, 2017 on PlayStation 4 and on Steam as a 4K HD Remastered version of the game. The Last Hope is a prequel to all three previous games about how Earth first made contact with other worlds.

After a nuclear World War III devastates Earth, mankind is forced to put aside their differences and unite for a common cause: to find a new planet to colonize and save the human race. Edge Maverick is an impulsive but determined young man who volunteers for this desperate mission alongside his childhood friend and foil, Reimi Saionji. Together with a ragtag group of crewmen, aliens and cyborgs, Edge explores the different alien cultures across the universe and tries to figure out exactly how mankind will live in this new galactic landscape.