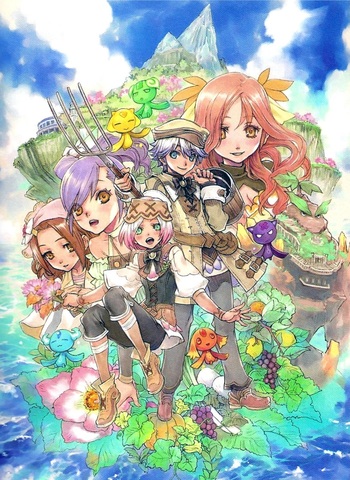 An ocean of possibilities!
Advertisement:

The fifth overall game of the Rune Factory series – as well as the second for the Wii, the first for the PS3, and supposedly the first to feature a female protagonist as an option – Rune Factory Oceans (known as Rune Factory: Tides of Destiny in North America) is the latest console installment in the Rune Factory franchise. Released in Japan on February 24th 2011, and in the US on October 11, 2011, the following details might be, of course, revealing to some. Read with caution - spoilers abound.

The story begins when childhood friends Aden and Sonja are enveloped in a bright light, and whisked away to another world. Upon awaking, however, Aden finds his childhood friend nowhere in sight – rather, her consciousness has been transported into his own body. A young lady by the name of Odette soon discovers Aden, and offers him housing neighboring the "Three Sisters" inn that she and her two siblings, Lily and Violet, run. Sometime thereafter, though, a giant rises from a large, sudden rift in the ground – the result of a seed that Aden and Sonja had planted previous to their current circumstances – and descends upon the land. Finding the being cute, Sonja names it Ymir, who then permits the two to ride on him as he walks about the ocean. With this, new islands are upturned, sea monsters are fought, and the strange place Aden and Sonja are stranded in is slowly uncovered.

Through all of this, the player may either control Aden or, after her body is recovered, Sonja, in addition to Ymir, who battles the larger enemies to be had in the game and raises upward of thirty lands - some of which may be farmed in lieu of a traditional field. Combat is once again conducted in real-time, though rhythm will factor as a larger part of success. Item synthesis, monster rearing, and relationship-building also remain as staples, and the ability to jump has been added. Portraits, however, have been swapped out in favor of "more-expressive"

in-game models when talking with a character, though the player can now change the accessory displayed on that character with the press of a button when speaking with him or her.