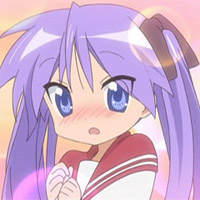 Why is Kagami so nervous?
Amalia: Come on, tell me, what happened? Did you dream about Sadlygrove?
Evangelyne: Uh... what? Sadlygrove? No. And why would I dream about that Iop brain anyway?
Amalia: [giggles] You're red as a tomato.
— Wakfu
Advertisement:

When embarrassed or otherwise deeply affected emotionally a character will exhibit a dark red blush just under her eyes, usually crossing the bridge of their nose. In more humorous works, their entire face may turn red, to the point that it's glowing hot. Turning away from the object of said blush and putting their hands to their cheeks is optional, as is playing with your fingers. In addition to/instead of a blush, a character may nosebleed, which has a more lustful connotation.

This is most likely to occur with characters who are more or less innocent. Occasionally, a brighter red blush may be used to show a character is angry. In times of severe effect, they may tuck themselves into a little ball while blushing. In times of even more severe effect, their whole skin may turn into a luminescent glow the color of molten iron.

For some reason, it makes well for Fanservice. Bonus points if the blushing character in question is a Tsundere.

In Real Life, blushing is something completely out of one's control. Hence why this is rarely portrayed in live-action medias.

Often pops up Through a Face Full of Fur. Compare Blush Sticker and Crush Blush — other tropes about blushing. See also Sickness Equals Redness and Drunken Glow, where the redness is caused by illness or drunkenness.

open/close all folders
Advertising
Asian Animation
Comic Books
Film - Animated
Film - Live-Action
Literature
The quote from the beginning:
‘I looked at him. The red of his fair sunburnt complexion deepened suddenly under the down of his cheeks, invaded his forehead, spread to the roots of his curly hair. His ears became intensely crimson, and even the clear blue of his eyes was darkened many shades by the rush of blood to his head. His lips pouted a little, trembling as though he had been on the point of bursting into tears. I perceived he was incapable of pronouncing a word from the excess of his humiliation.'
Live-Action TV
Video Games
Visual Novels
Web Animation
Feedback