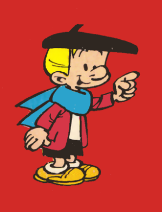 Benoit Brisefer (Steven Strong or Benny Breakiron or Benedict Ironbreaker in English, depending on the translation) is a Franco Belgian comic created by Pierre Culliford a.k.a. Peyo (The Smurfs, Johan and Peewit), and drawn with the assistance of François Walthéry (author of Natacha) and scenaristic input from Ivan Delporte.

The comic follows the adventures of the titular Benoit, a young, incredibly well-behaved and polite boy with super strength, though he loses said super strength whenever he has a cold. It ran from 1960 to 1978, with increasing schedule slips as time went on due to The Smurfs taking up most of Peyo's time. It was revived from 1993 to 2004 by Peyo's son.

Papercutz published four books in the series in English — The Red Taxis, Madame Adolphine, The Twelve Trials Of Benny Breakiron, and Uncle Placid.

A live-action film based on the character's first story was released in France on December 17, 2014 and starred Léopold Huet, Jean Reno, Gérard Jugnot, Thierry Lhermitte and Hippolyte Girardot. It is distributed by Walt Disney Studios in the US.