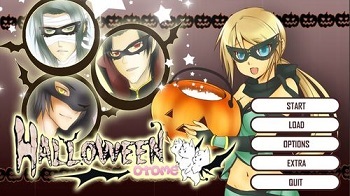 "You are cordially invited to the Annual Valdemar Halloween Extravaganza. Two weeks of luxury await you. Let’s see if you can keep up the masquerade…"
—The official website

Halloween Otome is an original English language game made by Synokoria. It is available for free here

Emma Cee (you can change the name if you wish) wins a radio contest to attend a two week-long masquerade filled with costumed (and unidentifiable) celebrities, hosted by actor Erik Valdemar. Emma soon finds out that the masquerade is in fact a game invented by the host, forcing groups to play games and complete puzzles in order to gather the most points and win the competition! Emma must work with her teammates to try and win the competition and make the most out of her experience.

Synokoria have released a sequel, Valentines Otome, which takes place after the events of Halloween Otome and features Emma’s best friend, Mira Cosgrove, as protagonist.