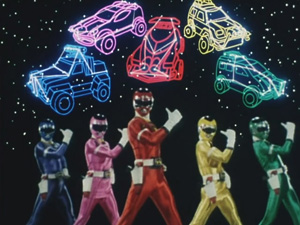 So tell me again HOW this is supposed to be a Sentai... The color scheme? Eh, good enough.
Fighting for traffic safety! Gekisou Sentai, Caaaaaaaaaaarranger!
Advertisement:

Gekisō Sentai Carranger (Extreme Rush Squadron Carranger) is the twentieth installment in the Super Sentai series, airing from 1996 to 1997. It's about a group of idiot workers at Pegasus Garage who use the power of car-shaped constellations to fight a group of idiot aliens called the "Space Bosozoku Bowzock".note Space Bosozoku Bowzock, "Bōsōzoku" being the name for biker gangs. A comparatively punny name would be "Space Biker Gang Bykagan".

As the twentieth installment of the franchise, it bounces between being considered an Affectionate Parody of Super Sentai and all the tropes it has, while being a full Super Sentai series in and of itself. At the time, Super Sentai was suffering from low ratings due to a terrorist attack, Executive Meddling and writer discourse affecting the reception of Chouriki Sentai Ohranger, meaning ratings started low and continued dropping due to the continuance of executive mandates to make the show silly and comedic over being well-written. That changed in the latter half of the show, as the executives simply stopped caring and allowed the writers to do whatever the hell they wanted past that point... after which the show's viewership literally doubled in a week in its mid-30's.

The show has long been credited by western fans as saving Super Sentai from cancellation; however, as stated in multiple interviews

Adapted in the US as Power Rangers Turbo. They attempted to make a serious series out of it at first (using the most goofy monster suits and stock footage imaginable) but gave up halfway - this disjointed approach nearly had Power Rangers getting cancelled, but the ratings recovered after the halfway point.

It is the 5th Super Sentai to see a US release in April 2017. It can be streamed for free at Shout! Factory TV