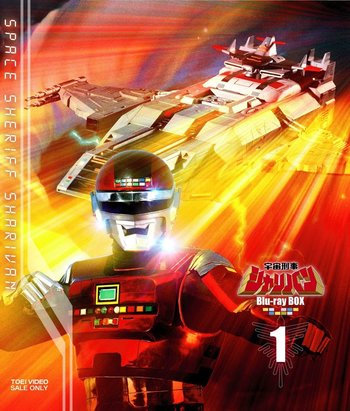 As told in an episode of his predecessor's show, forest patrolman Den Iga was attacked by a monster of the Makuu Empire and gravely injured. He is saved by Gavan, who sends him off to Planet Bird for treatment. Den returns the favor in the last episode when it's revealed, off screen, that he received Space Sheriff training from the Galactic Union Patrol and is now Sharivan!

Sometime after that, the evil Madou Empire, led by the evil Demon King Psycho, arises to conquer Earth. To defeat them, Sharivan and his sidekick Lilly must take action.

Space Sheriff Sharivan: Next Generation is the sequel movie to the Sharivan television series and Space Sheriff Gavan: The Movie. For examples related specifically to that, please use that page.

on YouTube as part of Toei's official Tokusatsu World channel.