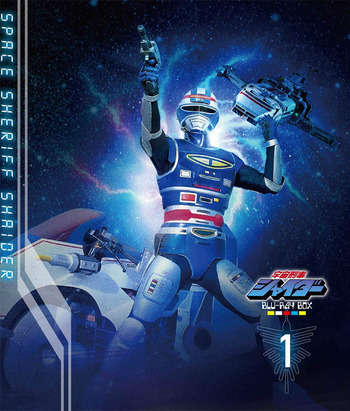 Space Sheriff Shaider was the third and final entry in the Space Sheriff subgenre of Metal Heroes Tokusatsu shows.

Archaeologist Dai Sawamura's remarkable analytical skills impresses the galaxy police enough to recruit him. He is then transferred to planet Bird, where he receives his training at the Space Sheriff Academy.

The unforeseen appearance of the mysterious organization Fuuma leads to the destruction of several planets. Suddenly an urgent need of manpower for mobilization to all the planets is required.

Once it is established that Earth is the next target of Fuuma, Governor Kom gives Dai the codename of Shaider and assigns him to safeguard the planet. Together with his fellow trainee, Annie, whose planet was destroyed by Fuuma, Dai returns to his home to fulfill his duty.

Space Sheriff Shaider: Next Generation is the sequel movie to the Shaider television series and to Space Sheriff Gavan: The Movie. For tropes specifically related to that film, please use the specific page

Became one of the series adapted in VR Troopers.