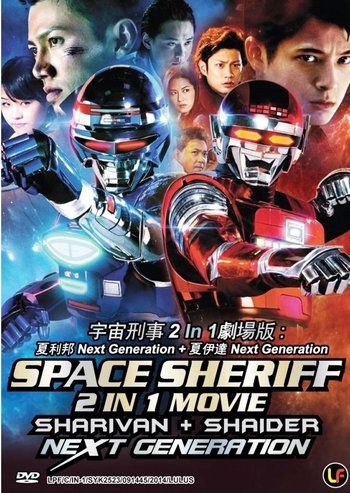 Space Sheriff Next Generation is a series of two direct-to-video films released in autumn 2014 by Toei, and directed by Koichi Sakamoto, serving as a follow up to the 2012 film Space Sheriff Gavan: The Movie and the 2013 crossover, Kamen Rider × Super Sentai × Space Sheriff: Super Hero Taisen Z, it focuses on the 3 new Space Sheriffs introduced in the former film, as well as featuring appearances from several characters and figures involved in the original trilogy of television series. It should be noted that the two films must be watched in order, as the entire plot of the 1st film is spoiled in the 1st minute of the second.
Advertisement:

The first installment, Space Sheriff Sharivan Next Generation opens with Geki Jumonji, Gavan defeating and arresting Lizard Doubler, a member of the once again resurging Makuu Crime Syndicate. Indeed the news, watched by a mysterious bird headed figure, soon informs us that Madou and Fuuma are also experiencing a resurgence. Geki reports to his superiors that he believes the crimes are in fact copycat crimes, but obviously with the sheer number of these copycats currently appearing throughout the galaxy, there still has to be some coordination. As such Kai Hyuuga, Sharivan, is sent with his partner Sisi to earth to team-up with another duo in order to bust a business deal between members of Neo-Madou and a leader of the local space mafia for Hyper-M, a hyper-stimulant that temporarily makes those administrated with it impervious damage, at the cost of shortly expiring if an antidote isn't administered. The team they're paired up with happens to be Seigi, otherwise known as Estevan, Kai's old friend, and his partner Aileen. Unknown to the other 3 though, Kai has also been assigned to determine whether or not Aileen is a spy feeding info to Neo-Madou. When the bust goes south due to Seigi's impulsiveness, and with Aileen continuing to act suspiciously, will Kai be able to make the right call?

The second installment, Space Sheriff Shaider Next Generation, opens with Geki bursting into the person responsible for the resurgence in the crime families, Horror Girl's hideout, only it turns out to be a decoy and he nearly get's blown up for his trouble. Furthermore, he's then told the investigation is suspended due to Commander Gordon's daughter, Hilda, being kidnapped by Priest Poe, an agent of Horror Girl, and if the investigation continues she'll be killed. Meanwhile Shu Karasuma, Shaider, is investigating a smuggling when his stakeout is ruined by his partner, Tammy, bursting onto the scene accusing him of cheating on him. This leads to a 3 man chase, Shaider chasing the smuggler, while Tammy chases Shaider. The package turns out to be a school girl, and when Shu gets forcibly bound to the girl, the monster abducts them both, leading Tammy to wonder why Shaider wouldn't involve her in the investigation. At the same time, Geki goes to Kojiro Oyama, an old friend of the Space Sheriffs, to help him continue the investigation more discreetly. Why is Shaider so desperate to keep Tammy away from the case, and what is so important about the girl being abducted?

Tropes specific to both parts:

Tropes specific to Sharivan Next Generation:

Tropes specific to Shaider Next Generation: