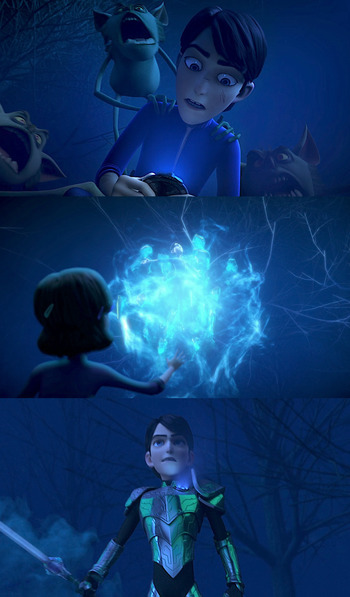 Good thing too, cause that armor would have been a pain in the butt to put on.
"Old tech. Functional, but old. 'Hey, people are shooting at me! Wait, let me put on my helmet!' Now, look at these... [demonstrates nanotech armour] The entire suit sits within the teeth of the necklace."
— Shuri, Black Panther
Advertisement:

Armor is nice, but it takes time to put on and take off, and can be kind of clunky if you have to go through narrow passageways depending on its size, also getting out of it in a hurry if you need to go to the loo can be a real pain. It's not like you can just wear it all the time! Wouldn't it be much nicer if you could just create a suit out of thin air — or, alternately, out of whatever raw-materials happen to be handy — whenever you need one? Well, if you've got Psychic Powers, Functional Magic, a friendly Symbiote or just some really nifty gadgets, you can!

Can range in size from a form-fitting suit to full-fledged Humongous Mecha; if the former, it may or may not be Powered Armor as well. It can also be used as a type of One-Winged Angel or Super Mode for the character in question. Note that we're not talking MacGyvered Powered Armor here — rather, the armor is propelled and assembled by supernatural power of some sort, or teleported in/assembled on the spot by Nanomachines. As a rule of thumb, if it takes more than a couple of minutes to assemble, it does not belong here.

Collapsible Helmet is a more specific Sub-Trope where only the helmet appears/disappears.