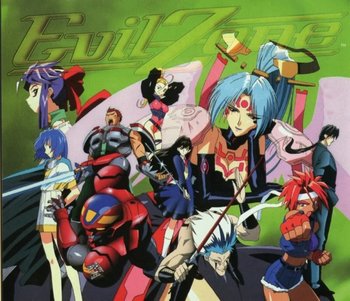 The Evil Zone awaits you.
Advertisement:

A Fighting Game by Yuke's released in 1999 for the PlayStation, known as "Eretzvaju" in the original Japanese.

The goal of the game is to defeat the evil super being Ihadulca, who was a sealed away. She was put there by the same people who summoned all the characters of the game to I-Praseru, also called "Happy Island", the world where the game takes place.

The standard tournament for no reason takes place, as the characters bumble into one another and fight for various reasons. As cliched as that may sound, the Story Mode does have one relatively unique feature: each character's story is presented like a different anime TV series, complete with next episode promos, recaps, and title cards. To tie into this theming, every character represents a different kind of standard anime genre, plot, or protagonist - but make no mistake, that's the central appeal.