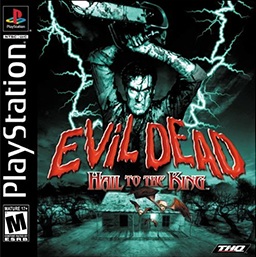 Hail to the King is first of the three licensed Evil Dead games published by the late THQ.

Eight years after the events of Army of Darkness, Ash decides to face his old fears by visiting the cabin where everything started with his new girlfriend Jenny. Soon, deadites are once again released. Now Ash must hack his way through them to find his disappeared girlfriend, and a way to send the bastards back to where they came from.

The game is an early Survival Horror game, with 3D-polygon characters moving over fixed 2D backgrounds, often from dramatic camera angles, similar to the first 3 installments in the Resident Evil series.