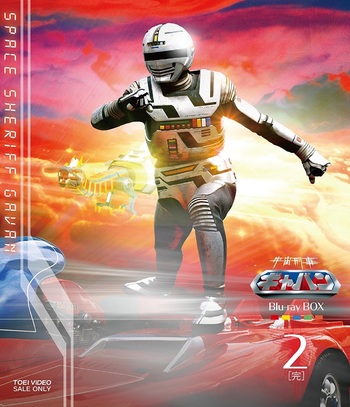 Space Sheriff Gavan (Uchū Keiji Gavan) is the first installment of the Metal Heroes franchise, as well as the first part of the Space Sheriff trilogy. It aired from 1982-1983.

Sometime in the not so distant future, Earth is invaded by the evil Don Horror and his intergalactic criminal organization known as "Makuu".note A portmanteau of the words for "archdevil/Black Magic" and "evil". Rather than cause the End of the World as We Know It, Don Horror plans to cause fear and panic amongst the populace and steal every valuable his minions can get their hands on. To help him achieve his ends, he can command his minions to use an "Axial Divertor" to suck victims into a frightening otherworld called "Makuu Space", where the Makuu gain 3x their ordinary power.

To thwart their plans, Retsu Ichijoji of the Galactic Union Patrol arrives on Earth with his partner Mimi to protect the planet. Donning a futuristic suit of Powered Armor, Retsu fights the never-ending battle against evil as Space Sheriff Gavan.

A Recap page is in progress.