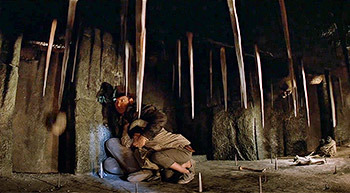 Willie! We are going to die!
"That was too close. You were almost a Jill sandwich!"
— Barry after saving Jill, Resident Evil (original PS1 version)
Advertisement:

Deceptively simple-looking Deathtrap intended to turn tall, dark and handsome heroes into short, red and gruesome meat patties. Usually doesn't work because the villain stupidly leaves (or allows a hero to retain) some object capable of holding back the ceiling long enough for an exit to be made, for the motor powering the ceiling to burn out or simply able to turn the damn thing off. Or he may forget the Five-Man Band has a Load-Bearing Hero with them. Sometimes may be (part of) a Living Structure Monster.

Deluxe versions include sharp, pointy spikes that grow out of the moving surface.

Occasionally some factories have a Descending Ceiling built in, possibly part of or at the end of a Conveyor Belt o' Doom. These places clearly have lost their OSHA compliance.

The impending danger is usually emphasized by multiple shots of the ceiling descending.

Often subject to Magic Countdown - the ceiling moves back with each shot. The inverse is Lift of Doom. When the walls threaten to crush a character, rather than the ceiling, that's The Walls Are Closing In. Whatever they do it's always Just in Time. This may also be a form of Advancing Wall of Doom. Video game levels based on this may be Escape Sequences.

The ceiling activates spikes and falls when Mario gets the key, forcing him to escape.

The ceiling activates spikes and falls when Mario gets the key, forcing him to escape.