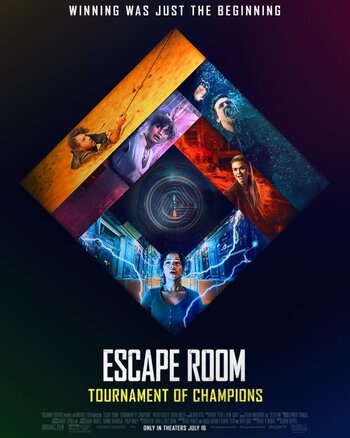 Winning was just the beginning.
Advertisement:

Escape Room: Tournament of Champions is a 2021 psychological horror film and a direct sequel to Escape Room, with Taylor Russell and Logan Miller reprising their roles as Zoey Davis and Ben Miller respectively, joined by Holland Roden, Indya Moore, Thomas Cocquerel, and Carlito Olivero. It was released on July 16, 2021 after several COVID-19 delays.

Six months after the events of the first film, Zoey and Ben decide to take the fight to Minos themselves by tracking their headquarters in New York City, only to find themselves stuck in another one of their deadly escape rooms. Now joined by four other people, all of whom are also survivors of previous Escape Room challenges, the group must find a way to solve the puzzles once again before it's too late.

The home release, released on September 21, 2021, includes an "Extended Cut" that features a slightly different plot and restores Isabelle Fuhrman and James Frain to the film (both were cut in the theatrical release).