Literature / The Pit and the Pendulum 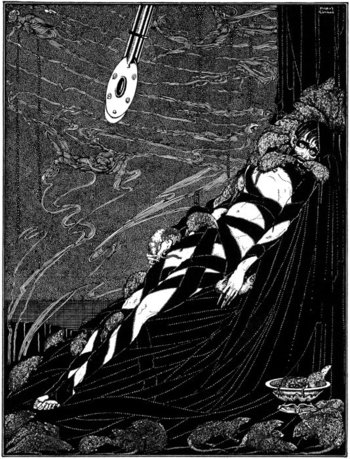 "The Pit and the Pendulum" is a classic short story by Edgar Allan Poe, first published in 1842 and subsequently revised in 1845 for the Broadway Journal.

The story is about a man who is brought to trial by The Spanish Inquisition. We do not learn this man's name or what he is being charged with, but it isn't long before he's found guilty of the unnamed crime and condemned to death, after which he promptly faints and awakens in what is soon revealed to be a cell. After fainting again, he discovers food and water nearby and explores the cell, learning that the perimeter of the chamber measures a hundred steps and trips on his robe while trying to cross the room, learning that he very narrowly avoided falling into a deep pit.

After losing consciousness again, the man finds himself strapped to a wooden frame on his back facing the ceiling, where a bladed pendulum is swinging back and forth and slowly descending, designed to eventually reach its victim and kill him. In a truly nailbiting sequence, the protagonist manages to escape just as the pendulum is going to slice into his chest. Then the pendulum retracts, the walls become red-hot and begin to close in, forcing him toward the center of the room and the pit. As he loses his last foothold and starts to fall into the pit, he is rescued by French soldiers who have captured the city of Toledo and rounded up the forces of the Inquisition.

The story has been adapted to film several times, including on film in 1961 and 1991.

Since it's now in the public domain, you can read the story here

Any death but that of the tropes!