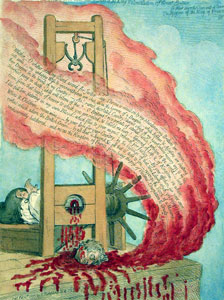 "The first maxim of your policy ought to be to lead the people by reason and the people's enemies by terror." —Robespierre
"Terror is only justice prompt, severe and inflexible; it is then an emanation of virtue; it is less a distinct principle than a natural consequence of the general principle of democracy, applied to the most pressing wants of the country."
— Maximilien Robespierre
Advertisement:

Finally, the revolution has occurred, La Résistance has won, and the tyrannous Evil Overlord has been deposed. This should be the end of The Empire, the establishment of a new era of freedom, peace, prosperity, and equality.

Well, as soon as Les Collaborateurs have been judged, condemned, and executed, of course. And we need to take care of all the enemies and reactionaries within us who still wish to undermine the new regime. And I'm afraid quite a few of those people who fought for the revolution along with me have just been revealed to be traitors as well! I have no choice but to seize more powers to deal with all the dangers which threaten our ideals, create a special force charged to investigate those who would betray the revolution, and an extraordinary jury to condemn them quickly.

It's all for the sake of our freedom so direly gained, of course.

This trope is for the aftermath of a revolution or rebellion, when the former leaders of the uprising find themselves in power and may become tyrants themselves, while the ideals that led to the revolution are forgotten by the populace and buried under bloody infighting between former allies.

This is often a consequence of The Revolution Will Not Be Civilized and having an army of Knights Templar in your ranks.

Compare and contrast with Full-Circle Revolution, which has virtually no change in the way things are governed after the revolution. These revolutions are compatible in that a revolution can produce no real change even after ruthlessly slaughtering large chunks of the population, and indeed, after all this slaughter, people may be quite content to merely get back to the old ways. The Imperial variant is Crushing the Populace, where you make sure no one will oppose you through sheer brutality.

The Trope Namer is the events during The French Revolution.