Literature / A Tale of Two Cities 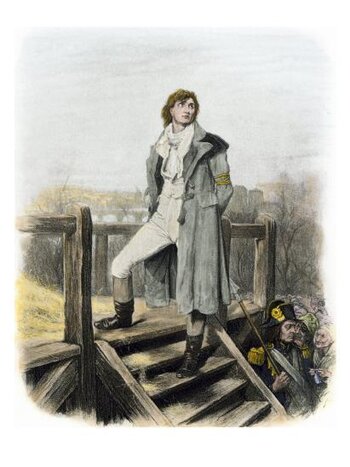 A Tale of Two Cities is a novel by Charles Dickens first published in 1859, dealing with the events of The French Revolution and their impact on the lives of a number of fictional characters living at the time. The two cities of the title are London and Paris: Paris is used as a symbol of lawlessness, while London represents Order, albeit containing problems that could, in time, lead to a situation as bad as Paris.

Lucie Manette, a young Frenchwoman living in England, receives news that her father, who has been lost for sixteen years and was presumed dead, is actually alive, albeit insane, and would she please come see him to see if her presence can help restore his sanity. She later marries Charles Darnay, who, unknown to her family, is the son of a deceased Marquis in France. When he receives a letter from France calling him to go save one of his former servants, France draws him in, and attempts to execute him. At the same time, Sydney Carton, a man who looks as if he were Darnay's twin separated at birth, tries to redeem his wasted life.

The novel has one of the most famous opening lines in literature, and the final scene includes a line that is almost as famous, (although context would be a spoiler):

Dickens' novel was largely inspired by his reading of Thomas Carlyle's The French Revolution: A History and took from it the sense of the Revolution as an elemental eruption of the human spirit when pushed too far. Thomas Carlyle's book was itself a highly romantic and melodramatic work rather than historical so the novel does suffer from Dated History to some extent despite being broadly accurate to the circumstances and events of the French Revolution. Unlike Carlyle, Dickens sympathized with the ends, though not the conduct, of the Revolution, and offers a glimpse of hope that after the extremists meet their end, France itself would rise a free and happy Republic, eventually.

As one of Dickens' most famous works and indeed one of the most famous novels of 19th century English literature, it has been adapted to the screen several times. There were no fewer than four silent film adaptations. The most famous sound adaptation is the Academy Award-nominated 1935 film directed by Jack Conway and starring Ronald Colman as Carton. There was also a 1958 film directed by Ralph Thomas and starring Dirk Bogarde as Carton, with Christopher Lee and Donald Pleasence in supporting roles; a well-regarded 1980 BBC series starring Paul Shelley as Carton and Darnay and produced under Barry Letts; a 1989 Granada/ITV series that utilised both English and French actors; and a 2008 Broadway musical.

If you're looking for the story of Bob Trimbolie and Terry Clark, it's right over here.