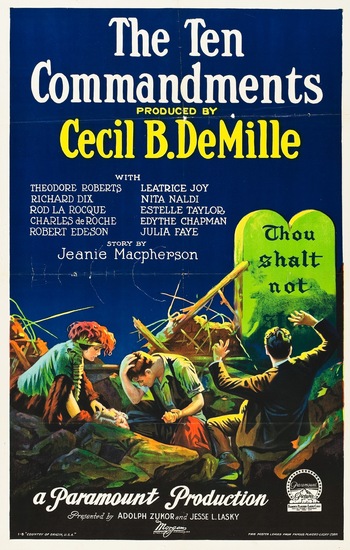 You cannot break the Ten Commandments — they will break you.
Advertisement:

The Ten Commandments is a 1923 silent film, best known for inspiring the more famous 1956 remake. Both versions were directed by Cecil B. DeMille, and the 1923 version entered the Public Domain on January 1, 2019.

While the 1956 film is devoted entirely to the Book of Exodus, the 1923 version confines the Exodus scenes to the first fifty minutes, in a section referred to as "the prologue." As a result, only a small part of the Exodus story is actually covered, beginning with Moses' return to Egypt and ending with the destruction of the Golden Calf. Additionally, the first nine plagues are essentially skipped over, with only a couple brief mentions indicating that they took place off-screen.

After the prologue, the film moves on to the intended main story, which takes place in the contemporary 1920s and seeks to illustrate how the Ten Commandments are still relevant in modern times. This story follows and contrasts the lives of two brothers, one who follows the Ten Commandments and another who does not. John, the believer, stays loyal to their pious mother, and is content to work as a simple carpenter. Dan, the cynical atheist, wins the heart of Mary, a more well-meaning atheist whom both brothers love, and he finds material success as an amoral businessman. But ultimately, of course, Dan's rejection of Biblical law brings him to ruin.

The Biblical prologue is widely regarded as the superior part of the movie, and is much better remembered as well. It's no surprise then that DeMille chose to jettison the modern story when he remade the film in 1956.

Tropes in the Prologue:

Tropes in the Story:

The parting of the Red Sea in the 1923 silent version

The parting of the Red Sea in the 1923 silent version